Researching information and genealogy details on my ggg-grandfather, Lemuel White, uncovered a connection that I was not fully prepared for, nor had it ever been raised by family members; my mother was a direct descendant of a Mayflower family.  From that knowledge, I was able to dig a bit further to then map out that I was in the 12th generation of descendants from William and Susannah White who made the original voyage in 1620-1621.  I thought that was a pretty fun fact to be a Mayflower family descendant and then read that I was in good company with 38 million others!

BREAKING THROUGH:  The first 4 generations of the first Mayflower voyagers were pretty well documented.  Further I had a decent collection of information and sources for generations 5 through 12. However, connecting generation 4 and 5 with a “primary” record that would satisfy the Mayflower Society, has been a challenge.  That research dig continues and continues…hopefully one day I will find it!

NEW INFORMATION:  I have had a lot of fun researching the White Family, meeting and connecting with various relatives in my search for answers.  I traveled to Iowa, Indiana and Illinois (hopefully soon to Ohio), to verify court records, church records, churches, cemeteries, newspaper articles and genealogy societies & museums.  A lot of fun and some success…and, not surprising to fellow hunters of genealogy answers, a number of brick walls.  With the White Family, I have seen church records across a number of denominations, the most surprising of which was a sole generation of Latter Day Saints:  Lemuel White.

This was surprising to me as I had come across of A LOT of German and Swedish Lutheran affiliation in my family as well as a fair number of Irish Catholics….and, a Baptist, Methodist, and Quaker here and there as well as the religious faiths of the Mayflower descendants through the first 5 or 6 generations.  What was even more interesting to me was that Lemuel White and his wife, Nancy (Morrow) White became involved with the Reorganized Church of Jesus Christ of Latter Day Saints during a fairly turbulent and controversial time of Mormon church history.  Prior to discovering this, I had been looking for baptismal, marriage and burial records in the local established churches in the cities that Lemuel and Nancy had lived:  Jackson, Preble County, Ohio; Whitestown, Boone County, Indiana; and Shabbona Grove, DeKalb, Illinois.   Now I know why I was unsuccessful...Lemuel and Nancy did not attend those churches that I could find.


The Mormon church was organized in 1830 with Joseph Smith dying in martyrdom in a violent massacre in 1844 (Brigham Young assuming Presidency the same year); this was a time of significant controversy.  I had found reference to Lemuel in “The True Latter Day Saints’ Herald”, Volume 2, Number 1.  (February/March 1861) noting that in Whitestown, Indiana, Lemuel White was a “priest”…and, also referenced in this newsletter was the Trout family whose daughter Martha Ann married Lemuel’s nephew, Valentine White (through his brother Elisha).   This article was highlighting that they were organizing a church in Whitestown. 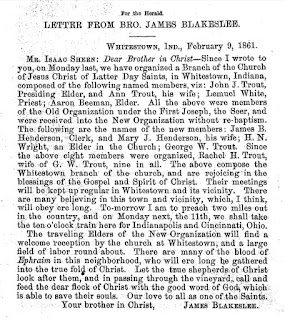 By January 1865, another article noted that they had been “laboring in… spreading the truth” and, that they found “a great deal of prejudice existing in the minds of the people”.  I have been unable to learn more of how this difficulty impacted the White family, but they moved from Whitestown (some research state the town was named after Lemuel for donating a great deal of land to form the town...see above map) in November 1865 to live in Shabbona Grove, Illinois.  The Whites continued their belief in the Mormon Church as they were buried in a cemetery of fellow LDS believers.

However, none of their five children who survived to adulthood continued with the Mormon religion…the two oldest daughters died young, the youngest daughter moved out to Southern California by herself around 1900 to live as an artist (never married, never had children), and their two sons followed the religion of their spouses.

It was an interesting time and I have so, so many questions.  Sounds like a research opportunity.
Posted by Terri at 6:58 PM