OFFENSIVE TERMINOLOGY: Being a parent of a special needs child, I have found that certain terms or expressions have become quite offensive to me.  Growing up, while not common, you would occasionally hear the reference to “retard” on the playground describing someone who did something considered foolish, stupid, or dumb.  I am embarrassed to say that it did not particularly strike me as offensive then, without the context that I have now. It should have, but it did not.  As a result, to this day, I try to provide that context to others…I have found that almost everyone I have shared that context with (“retardation” or intellectual disabilities are NOT synonyms for “foolish, stupid or dumb”), usually get it pretty quickly --  that making a mistake or not understanding something should not be met with an offensive joke/blurb about "being a retard", or “taking the little yellow bus” to school or work that day.

FAMILY CONNECTION TO THE SONOMA STATE HOME: So, it may not surprise you to read that with my passion for genealogy and my personal belief that respect for the individual is paramount, particularly respecting those with intellectual disabilities, I had an emotional time working through the research for an ancestor on my husband’s side of the family.  An ancestor who died young at the age of 18 from the Spanish Flu. That he died young from the Spanish Flu was all we really knew of Elmer John Ryan –  a death of a young man, the oldest son in the family, from the global Spanish Flu epidemic in 1918… a sad occurrence for the family. We knew that he died in Eldridge at the Sonoma State Home (Hospital), but we had read somewhere that with the Spanish Flu epidemic, there were many hospitals that were opened up to take Spanish Flu cases given the great number of individuals impacted in the Bay Area.   Further, we had no family stories or information that my husband’s grandfather had siblings diagnosed with special needs.  However, when we finally obtained Elmer John’s death record, it stated how long he was treated for the Spanish Flu (less than a week)…..AND, more significantly, how long he resided at the Sonoma State Home – 3 months.  It was this second piece of information that suggested he was there as a patient or inmate and not just because he contracted the Spanish Flu as did thousands in the Bay Area.  With that little nugget of information, I scheduled a day off work and headed to Sacramento to the California State Archives. The State Archives hold a number of records tied to the Sonoma State Home, some of them available to the public and some restricted. The archive staff is incredibly helpful.

SONOMA STATE HOME
The Sonoma State Home, opened in its current location on in November 1891, originally called the California Home for the Care and Training of Feeble Minded Children (established in 1883).  In 1909, the name was changed to the Sonoma State Home; in 1953 to the Sonoma State Hospital, and ultimately, in 1986, to the Sonoma Development Center as it is called today. In these early days, the Sonoma State Home had primarily four types of residents and from the start, the Home was overcrowded. Per the terminology at the time, they admitted: (a) the mentally handicapped, (b) the epileptic, (c) the physically disabled, and (d) the “psychopathic delinquent”.  The grounds are beautiful, covering 1,640 acres of land in Sonoma County, California -- in and adjacent to the California Wine Country.  The main building is now listed in the National Register of Historic Places in 2000.

AMERICAN EUGENICS & STEPS IN MENTAL DEVELOPMENT (MORON…IDIOT…IMBECILE)  While I was not able to find Elmer John’s case file or medical records, I was able to verify that he (or his parents) originally applied for admission on March 25, 1918 and that he was ultimately admitted on August 22, 1918 (Elmer died on November 10, 1918). The next column of data sent me for a spin…under the column heading of “Level”, it said “Moron”; others listed on the page were labeled either as “Idiot” or "moron".  What? Are you kidding?  This is a medical admissions log!  Even knowing that this entry was written 100 years ago, had my ire up.  From there began my research into The Sonoma State Home in the early 1900’s…a history that is sad, disheartening and sickening.  This was one of those times when researching family history that I wanted to jump into a time machine and shout “NO!!!" at the top of my lungs and do everything I could to change/correct and redirect their thinking.

What I stumbled into was the American Eugenics movement.

INTELLIGENCE TESTING
In 1910, at an annual meeting of the American Association for the Study of the Feeble-Minded, Dr. Henry Goddard proposed definitions for a system to classify individuals with mental retardation based on intelligence quotient (IQ); he referenced the Binet-Simon test, published in 1905, that focused on verbal abilities intending to identify mental retardation in school children (revealing a “mental age”).  Goddard used the term “moron” for those with an IQ of 51-70 (a mental age between 8-12 years), “imbecile” for those with an IQ of 26-50, and “idiot” for those with an IQ of 0-25, as categories of increasing impairment.  This system was used for decades.  Morons, according to Goddard, were "unfit for society" and should be "removed from society either through institutionalization, sterilization, or both".  Goddard was a strong advocate of eugenics, or “…improving the qualities of the human species or a human population by discouraging reproduction by persons who have genetic defects or presumed to have inheritable undesirable trait”, meaning (involuntary) sterilization. The medical superintendent at the Sonoma State Home, Dr. William Dawson, around this time hesitated to promote compulsory sterilization; rather, he felt colonies should be established where the “feeble-minded” could be segregated. 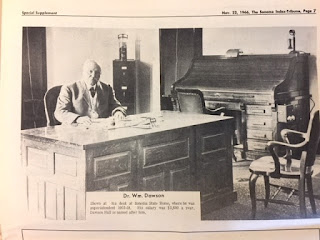 Until 1918, sterilization was rare at the Sonoma State Home (also referenced, interchangeably, as “Eldridge” which was city, and the train station stop, in which the State Home was built), with only 12 inmates forced to undergo the operation.

However, after Dr. Dawson died in 1918, and under new superintendent, Dr. Fred O. Butler, it became virtually a factory operation, with about 5,400 sterilized between 1918 and 1949, a thousand of the procedures performed by Dr. Butler himself.  Per Dr. Butler, "We are not sterilizing, in my opinion, fast enough,".

ELMER JOHN RYAN
Without access to Elmer’s case file or medical records, we do not know what occurred during his three months of residence at the Sonoma State Home between August and November 1918.  Elmer was identified in the admission entry as a “moron” which, per various articles, suggested he was at the level most “unfit for society” per Dr. Henry Goddard’s work. The only other item we can gleam from the admission records is that he was originally assigned to the B Annex, but we have no other information about how he lived or how he was treated while living there.  I am holding on to hope that with the superintendent change in 1918, Elmer did not experience the forced sterilization under Dr. Fred Butler’s reign; while segregation was bad enough under Dr. Dawson, at least Elmer would not likely have experienced the next level of abhorrent treatment with involuntary sterilization, or asexualization. We may never know.

It was sad enough to know that he suffered the Spanish Flu and died so young.   And, I am not sure what Elmer’s parents thought Elmer would experience or how he would benefit from his admission application to the Sonoma State Home…knowing how strongly Elmer's mother felt about family, I choose to believe that they had no inkling what was going on in Eldridge...rather that this was an alternative environment for Elmer to live a productive, healthy life.  Unless I find other documentation, we will never know.  In the end, Elmer lived in a place and during a time when the American Eugenics movement escalated, becoming an ugly, ugly part of the State’s history playing out in an incredibly beautiful part of Northern California.

I am choosing to remember Elmer as I see him with 4 of his 5 siblings in this picture (L to R:  Elmer John, Jennie, Walter, Helen, with Thomas standing in the back)…as part of a busy tight-knit Irish/Scottish family living in the South San Francisco, San Mateo areas of the Bay Area, experiencing and living through the turn of the century, doing day to day things like attending church, school & work, playing with friends, and experiencing historical events/occurrences such as surviving the 1906 Earthquake and seeing the joys and wonders of the 1915 world’s fair.
Posted by Terri at 5:59 PM No comments: