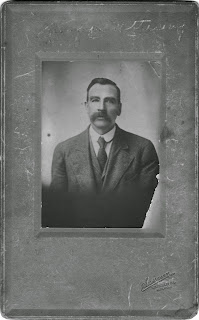 My paternal great-grandfather was born July 30, 1854 in Utterbyn, Fryksande Parish, Varmland, Sweden.  He was the 9th child of Per Persson and Marit Ersdotter.  Sadly, as was somewhat common for those times, at least 3 of his older siblings died as infants or toddlers.  Utterbyn is a small town outside of Torsby, Sweden.  Nels was primarily raised by his father as his mother died when he was 2 years old.

Nels joined the Swedish Army in July 1876 and was a soldier in the Varmland’s regiment, soldier number 100 at Alvdals Company. Nels took the name of Utterberg from his home town after serving in the King’s Guard (a common practice in the Swedish Army).    Later that year, he married a local young woman, Matilda Nilsdotter, in Utterbyn on November 26, 1876.

It was understood that Nels immigrated to Minnesota in/around 1880, along with several men from his hometown/general area.  They traveled as a group and, upon arrival, built sod houses; after which, their wives followed from Sweden and joined them in Minnesota. Nels and his cousin, Nels Dahlman, spent several winters as lumberjacks in Brainerd, MN.  Gothenburg, Sweden passenger records show Nels Dahlman left Sweden in July 1881 with an identified destination as Cokato, Minnesota; it has been harder to find the passenger listing for Nels Utterberg.

It is thought that Nels immigrated between 1880 and 1882. They eventually settled in French Lake, Wright County, Minnesota. Swedish records indicated that Matilda left Utterbyn with Frida, Carl, and Amanda on May 4, 1883, and left Sweden (via Gothenburg) on May 11, 1883 via the same ship that her husband’s cousin, Nels Dahlman, arrived two years earlier, the Romeo; they arrived in New York on May 31, 1883.

Their 4th child, Hilma, was the first to be born in the U.S. in January 1886.  Nels and Matilda were expecting their 5th child shortly thereafter; however, both Matilda and the baby girl, also named Matilda, died in 1887.


Nels contacted his relatives, as well as Matilda’s relatives, back in Sweden.  Matilda’s younger sister, Emma Ingeborg, was sent to help with the children.  It is said that she had a suitor who had immigrated to the U.S. and settled in Wisconsin.  She, however, came to help Nels, arriving in the US in December 1887.  Nels and Emma married a little less than a year later in October 1888.  They had 7 children together between the years of 1890 to 1903.  The Utterbergs ran a farm in the town of French Lake.  A busy house full of 11 children helped with the many duties of the farm.


Around 10 years after Nels’ arrival, he arranged for 3 of his brother Erik’s 6 children to come to Minnesota (John, Erik Conrad, and Anna).  After working to earn money, Erik’s oldest son John purchased a local farm and sent for his parents and remaining siblings in 1897.  They also settled in the French, Lake and other nearby towns in the Wright County area.  Emma’s two sisters, Joanna and Karolina, also came to Minnesota and with their families settled in nearby Pine and Hennepin counties.

As children grew and married, the Utterberg Farm continued to be a
meeting place for family gatherings; my father, one of Nels’ grandsons, had many wonderful memories of spending summers on the Utterberg Farm.


Nels farmed and lived on the Utterberg Farm until his death on October 9, 1929 at age 75, 20 days before the stock market crash, on black Tuesday, that launched the U.S. into the depression. Fortunately, the family farm stayed in the family, with Nels and Emma’s daughter, Hulda, and her family moved onto farm, living there in the 1950’s and 1960’s.

Email ThisBlogThis!Share to TwitterShare to FacebookShare to Pinterest
Labels: Utterberg