I began to dig much deeper into my family history when I was an adult and several years after my grandmother passed away.  I wished I had asked her more questions while she was alive. From speaking with my mother, she recalled a maternal aunt and 4 maternal uncles.  That, along with what my grandmother shared, got me started.

My first step was to go find Edward, my grandmother’s father.  I was able to start my family tree on Ancestry.com and was thrilled to find each new layer and tidbit – census information, military draft registration, and newspaper articles.  What eluded me was his death information (and burial details)…and anything that would provide insight into his parents and siblings.   In June of 2008, I was able to track down my grandmother’s brother, Jim, and called him at his home in Iowa Falls.

We had a great conversation and he shared information to help me continue on….Edward’s middle name, how many siblings Edward had (and their names), Edward’s father’s name,  what happened between 1930 and 1940 when the census records showed a split in the family, and what his father liked about the blacksmithing profession.

This information opened up my search quickly and helped me differentiate my g-grandfather’s family from others (interestingly, there were a lot of Merklins from Illinois in the mid to late 1800’s).  Jim and I exchanged letters a few more times and then I received a letter from one of his sons that he died in November 2008 at age 90.  It was a blessing that I had the chance to speak to him live…it also helped introduce me to his family who I would meet in person the next summer when my mom, sisters and I went on a family history trip in Minnesota and Iowa. To this day, I am grateful to my Uncle Jim, as I may not have been able to find, or find as quickly, the information I was looking for. I had so many more questions about Edward, but I was now equipped with more information to understand more of his life and his ancestors.

My maternal great-grandfather, Edward, was born June 15, 1880 in Marine, Madison County, Illinois to Nicholas Merklin and Elisabeth (Hans) Merklin.   Edward was a 1st generation German-American, as were his 5 siblings who survived to adulthood.  His father’s family came from Southwest Germany in a town named Bahlingen, not far from the Black Forest, and his mother’s family came from Marienthal, Germany, formerly in Bavaria. 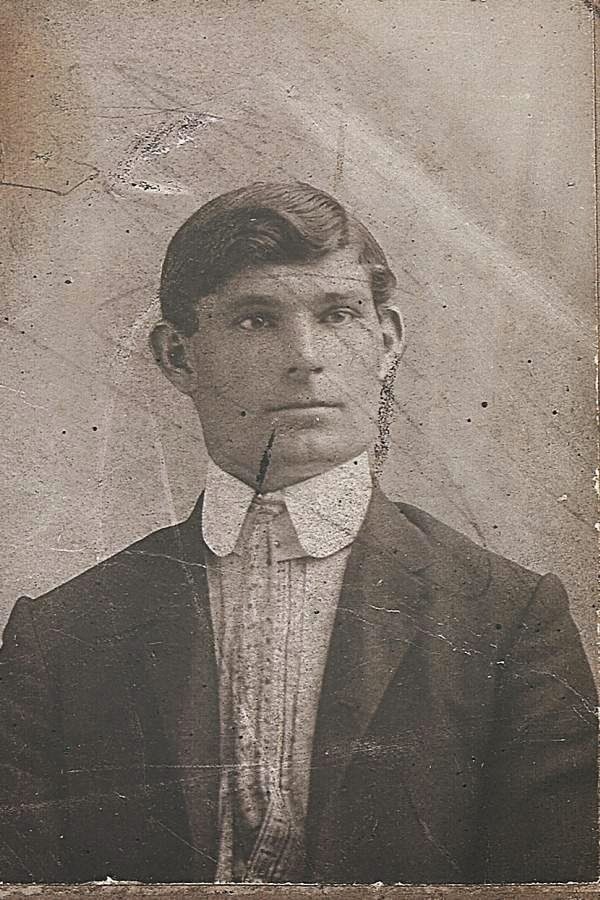 Edward was the 5th child born to Nicholas and Elisabeth -  his older siblings were Nicholas (who died as an infant), Katherine, Lena Maria, and George.  His younger siblings were August Otto “Gus”, and Louise Elizabeth “Lucy”. Both Nicholas and Elisabeth’s families were in Marine, Illinois or adjacent cities.  There was a strong and growing German community in the area…many having immigrated through New Orleans, up the Mississippi to just outside St. Louis, and, finally to Marine, a growing community of German immigrants.

They were farmers in the area and were surrounded by family.  In 1888, when Edward was 8 year’s old, the family moved to Graettinger, Palo Alto County, Iowa….joined also by Nicholas’ brother, Jacob.  Unfortunately, Edward’s mother died young at age 43 when Edward was 15.

By 1900, Edward and his older brother George, had moved further West to Northwest Iowa, and were listed as servants/farm labor in a local German family’s home.  Over the next 5-10 years, Edward, George, and younger brother Gus, would begin professions in the blacksmithing trade.  In 1905, a local paper in Sheldon, Iowa noted, “Ed Merklin of Sheldon and Roy Pinney of Le Mars, have formed a partnership and purchased a wagon and blacksmith business in Sheldon. Mr. Pinney is moving his family to Sheldon,”

By the 1910 census, in April 1910, Edward was shown in Sheldon, Iowa, living in the home of his future wife’s family, listed as a lodger.  On June 4, 1911, Edward married the eldest daughter of Sylvanus and Margaret (Donohue) White, Helena Agnes White. They moved to neighboring LeMars, where Edward purchased a business.  In March 1912, the local newspaper, LeMars Semi-Weekly Sentinel, commented, “Ed Merklin, who has been working in the Belau blacksmith shop, has purchased a half interest in the Union blacksmith shop with Ray Hart. The new firm will be Hart & Merklin.”

A few months later, their first child (my grandmother) Margaret was born.  Announced in the LeMars Semi Weekly Sentinel on May 10, 1912, “Born on Friday, May 3rd, to Mr. and Mrs. Ed Merklin, residing in on Cedar Street, a girl.”


Between 1918 and 1930, 5 more children were born:  Jim, Eddy, Donald, Betty and Joe.  All the while, Edward remained in the Blacksmith business.  It was in the early 1930’s after the family struggled, as did many, with the depression, that the family fell apart.


The facts from this point out get fuzzy, only a few recollections remain.  Edward’s son, Jim, told me that he and Edward left the family in the early 1930s (sometime between mid-1932 and mid-1935) and headed up to Minnesota.  Edward continued to travel to find work and Jim was left in the care of a family in Worthington, MN.  Jim later would meet his 1st wife in Worthington and had very fond memories of the family who cared for him.

Back home in Sheldon, life was more challenging.  At this time, both of Helena’s parents had passed away and she was on her own, but she did have many cousins and her siblings nearby.  It would appear that she was unable to care for the 4 remaining children (my grandmother had already married and move away).  The oldest two sons, Eddy and Donald, were sent to live in an orphanage, St. Joseph's Orphanage in Wabasha, MN.  They would have been around 8 and 12 at the time.

Helena and the younger two children, Betty and Joe, moved to Blue Earth, Minnesota, where Helena lived until her death in 1967.  The 1940 census listed Helena as divorced; having coming from a strict Catholic family, I can only imagine how difficult this may have been at the time.

Edward continued to move on and work as a blacksmith...in 1935, he was in Worthington, MN and by 1940 he was in Iona, MN.   His son, Jim, had shared that Edward loved working with the horses.  He was known in his blacksmithing career as an expert horseshoer.

At some point, it would appear that Edward remarried to woman named Cyanthia and they lived in Bryant, Hamlin County, South Dakota. Marriage records have not been located, but he is listed as her spouse on her death record.  The time and details between 1940 and Edward’s death in 1960 have been hard to track down, but I will continue to search.  To this day,  it breaks my heart to read how this family was torn apart…the older 2 children moved out early, the middle two sent to an orphanage, and the younger two stayed with their mother having no memories of their father. I met my grandmother’s sister, Betty, in 2009 and she only knew her father’s name and nothing else. Fortunately, as the children grew up, they stayed in touch with each-other as adults and were able to form sibling bonds.


Edward died in 1960 from bronchial pneumonia while in the hospital in Watertown, South Dakota, and is buried at Woodlawn Cemetery.