My husband’s family history has a few brick walls…one involving his great-grandfather, John Ryan, and another involving his maternal grandfather, John Perasco, who went by Jack.  These two “Johns” have been the focus of many research attempts on my part and other family members. Jack Perasco’s wife, Frances Eleanor, was calmer by nature, leading me to believe the high energy, the passion-for-living approach, and strong social tendencies of both my husband and my mother-in-law come directly from Jack Perasco.  It was thought Jack came from 100% Italian and a first-generation Italian American; it may have been that they lived in Italy for a while or for some time; however, Ancestry DNA indicated his ancestry was tied to The Balkans, and Eastern Europe/Russia (aligned to Romania/Southwest Ukraine).

Unfortunately, Jack did not speak much of his family history (and, perhaps he did not know much himself) even with his wife, Frances (as my mother-in-law recalls asking her about it); sadly, Jack died young at age 43 after an airplane incident (see below), so his children and future grandchildren did not get more opportunities to ask him directly.
What his children knew about him was that he was born on January 7, 1904, in Syracuse, New York. And, that his parents were Italian immigrants.  It was also believed that he had two older siblings, and that there was a notable age difference between Jack and his sisters.  A birth certificate for Jack could not be found and, in fact, in later years when Jack went to apply for a pilot’s license, he had to go through a formal process to prove his U.S. citizenship.  While US Airman records show that the process was achieved, the records did not maintain that proof of birth for future reference. In 1927, Jack was living in Pasadena working as a laborer.

Jack met his future wife, Frances Eleanor Richardson, in Los Angeles and by 1930, they were living in San Gabriel and Jack’s occupation was an Oiler (road worker).

Their eldest daughter recalls that her mother shared with her that a distant cousin introduced Frances and Jack.  She also recalls that this same woman lived in a guest house in the back of their house in San Gabriel and remembers her mother calling this woman “Ned”; the younger children remember a woman living with them for a while, but don't recall who.  The affidavit that was completed to assist in the proof of Jack Perasco’s U.S. birth was signed by a woman named Edith Crickelair in 1942, but nothing points to this person being "Ned".  This becomes another avenue to research, but so far, no family connection has been made to Edith.
Jack and Frances were in the San Gabriel house at the time of the 1940 Census (Jack being listed as a truck driver).  Included with the Perasco household on the 1940 US Federal Census was a woman named Sadie Berrier, noted as the maid; interestingly, their younger children do not remember having a maid, and did not think they had the funds to support one.  The oldest daughter recalls that Frances was a nurse, working full time, perhaps Sadie was someone hired to help with the young family while both parents worked. Not clear which. More research opportunities!


Frances and Jack had three children, born between 1933 and 1942. In March 1942, an article in the Metropolitan Pasadena Star News listed Jack as part of the Civil Air Patrol, as a Training and Operations Officer A. Frances and Jack moved from San Gabriel to Bangor, CA, then to Oroville shortly after their 3rd child’s birth in 1942.  The youngest children recall living in Bangor a couple of years, while Jack was in business with a Mr. Middleton.


Jack worked doggedly to obtain his pilot’s license and, after a few unsuccessful attempts, was successful in obtaining his pilot’s license.  In reviewing his airman’s files, it was interesting to note how determined John was at passing both the written and actual flying test.  At one point, he was a test pilot during the WWII and, in later years, a crop duster in Bangor and in Oroville.  Family stories and his US Airman records state that at least one neighbor complained that he was flying too low near her property in Oroville.


In early September 1947, while flying for the first time in his new airplane, prepared for crop dusting with the plane full of Sulphur, the airplane caught on fire.  Jack was able to land the plane safely. He went back to try and put the fire out, to save the plane and breathed in the hot Sulphur. Unfortunately, the burning chemical, overly inhaled by Jack, lead to his death.  His youngest daughter recalls that he came home after a hospital stay, and she sat on the floor next to the couch where he lay, holding onto his big warm hand, and he died the next day.  She recalls that he suffered closer to 3 weeks before dying.   Jack is buried in the Old Oroville Cemetery next to Frances, who died in 1973.

We have little else to help break down the family history brick wall that I am hoping, once penetrated, tells us more of Jack’s ancestors and relatives.  We have tidbits of stories, including that Jack only made one meal, a delicious homemade marinara sauce that his youngest daughter has since documented… and, that there is some recent speculation that he was not born in Syracuse, New York but Siracusa, Sicily.  The only reference to his family members were listed on his obtained birth record, father Joseph Charles (stating a birth “in Europe”) and mother Anna (no maiden name given), although census records were inconsistent on this information.  It was also shared through family stories that Anna died when Jack was young and that he was often left to tend to himself afterwards.  We were not successful in finding any evidence of their life or presence in Syracuse, New York…nor were we able to find anything in immigration records or at Ellis Island. 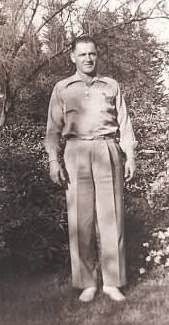 There are not many “Perasco” families listed in ancestry sites. Interestingly, there are a few, with some close name variations that have either Greek or Turkish ancestries.  Given the geography of Italy, Greece, and Turkey, it would not be surprising to have some migration and movement across those countries as we go back in time.  Or, another possibility is that the name Perasco was misspelled during immigration, making a search in Italy a bit more difficult.  DNA results (from all three of his children) tell us to also start looking in Romania, and the Balkans (no Italian reference in their DNA matches, but perhaps the family lived there for some time...unknown).  I will keep the search going and one day, I hope to take Jack Perasco’s history back to know about where his parents came from and what happened to his siblings.
Thanks to all three of his children, Shirley, Ray and Kathy for helping with background, for providing pictures, and helping me access his airman's records.
The search continues...
Posted by Terri at 1:20 PM

Email ThisBlogThis!Share to TwitterShare to FacebookShare to Pinterest
Labels: Perasco